The vanKoeverden sisters of Rochester, MN, want you to know they were Ana and Elsa way before the Frozen franchise came along. And to answer what starstruck little kids ask all the time: No merchandise. No millions. Not even free movie tickets.

Like their animated counterparts, Ana, 14, and Elsa, 12, are brave, strong and, yes, beautiful. But instead of an epic adventure to free their kingdom from eternal winter, the threat being faced by the real-life sisters, alongside their parents, is brain cancer.

A few months after her third birthday, Ana was diagnosed with a Grade 1 pilocytic astrocytoma, a slow-growing tumor in her brainstem. She had been vomiting on-and-off and, after ruling out simple causes, doctors at Mayo Clinic—where Ana’s Dad, Kevin, is a nurse anesthetist and Mom, Heather, worked as an occupational therapist—scheduled an MRI.

The tumor that turned the family’s life upside down was in a place too delicate for surgery, so Ana’s first treatment was a 15-month chemo regime. Two years later came another nine months of chemo, followed by six weeks of radiation. Then after four years of stable scans, the tumor grew again. 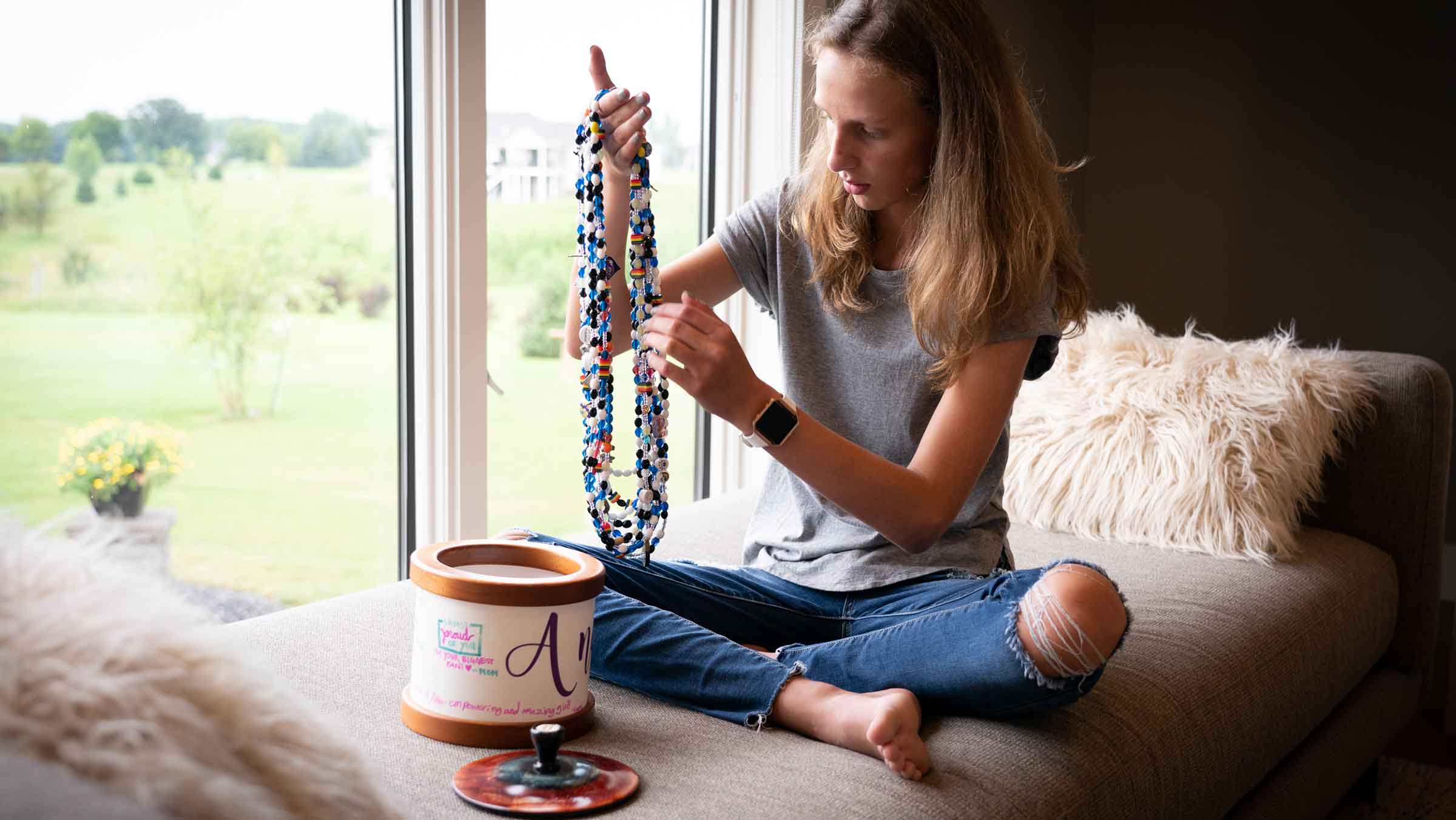 Among Ana’s most favorite Beads of Courage are the hearts, which mark the end of a chemo cycle. She keeps the beads in a canister, on the outside of which people who have been part of her health journey have added their signatures.

It has been stubbornly persistent since 2017, and Ana is now on her sixth line of treatment. That’s cancer-speak for the number of times and approaches doctors have used to attack the tumor.

Ana has more than 800 Beads of Courage to show for it. One for every needle poke, scan, dose of chemo or radiation or hospital stay over the past 11 years. But there are no beads for rashes, fevers, nausea, weight loss, exhaustion, missing school and having to modify so many activities for such a long time. 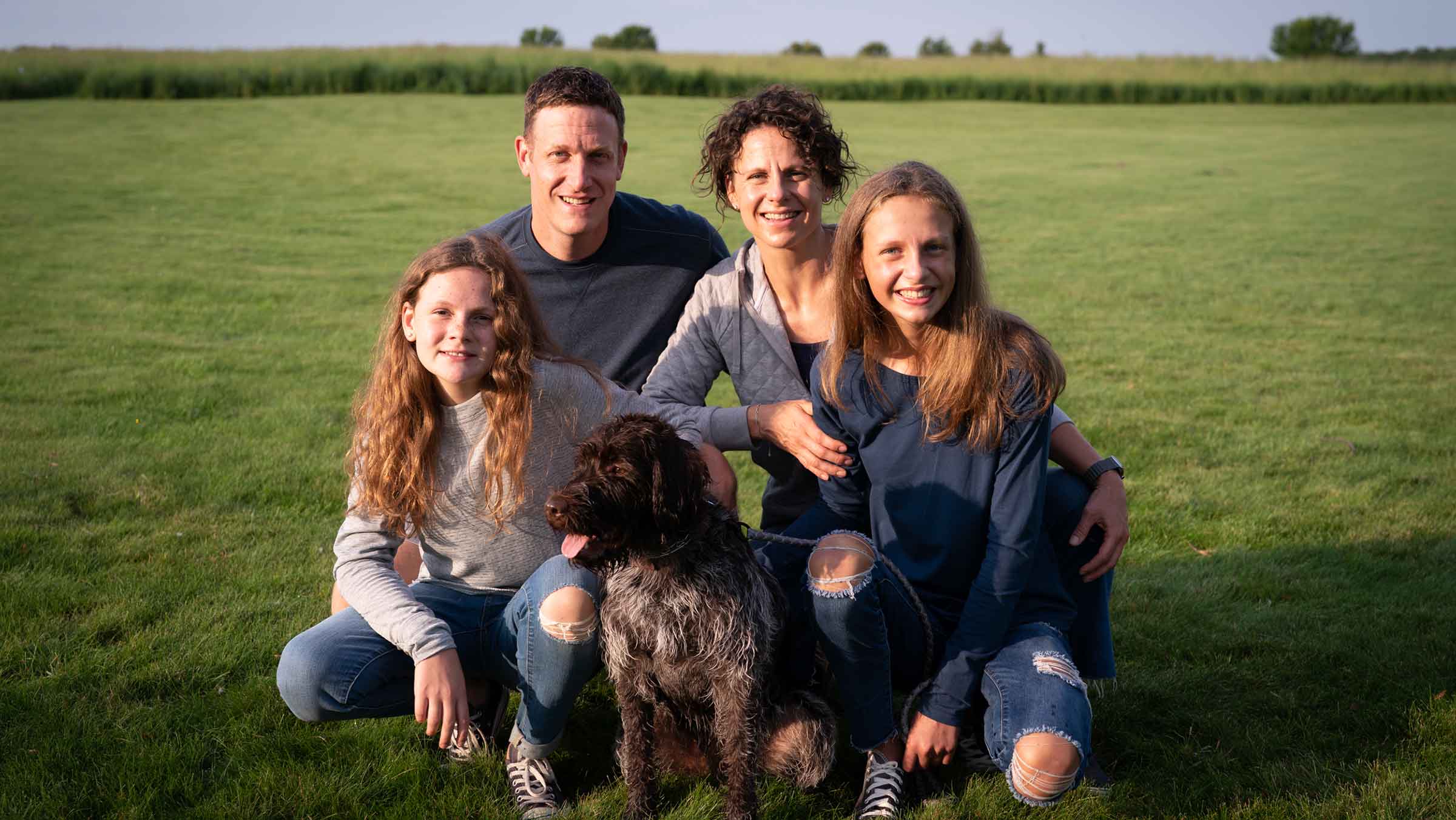 Heather and Kevin vanKoeverden, with daughters Ana, Elsa and Calla, the family’s Wirehaired Pointing Griffon. The breed is known for being loyal, vigilant and gentle, which Ana confirms. She said, “When I spend time with Calla, I feel like she’s always there for me. Whenever I sit on the couch, she’ll just come sit by me because she wants attention and wants us to love on her.”

Putting sister Elsa into words is trickier. Just 17 months old at the time of Ana’s diagnosis, she has little or no memory of when cancer wasn’t in the family picture. Glimpses of her spirit and soul show in the CaringBridge Journal that Heather and Kevin have been updating since 2008.

The day before Elsa turned 4, on May 3, 2011, Heather wrote, “Elsa has grown up as a ‘shadow survivor’ and knows nothing different than hanging out with kids without hair, playing doll-hospital and joining us on this journey and all that goes with it. As she matures, she takes on a new understanding of the story. This kid can come up with some amazing questions about God and how this whole deal works.”

She even wondered aloud when she might be getting cancer, too, as if it was a normal part of childhood, like well-child visits and immunizations.

Other Journal entries describe Elsa wanting to sell her toys to give money to Ana’s doctors for better medicine, helping Ana put on her shoes and coat for a post-chemo trip to the ER, and asking her parents, “When is this cancer ever going to go away?”

With no answer to this question, the vanKoeverden girls simply keep going.

For Ana, it’s mornings at school and afternoons to rest, recover and do homework. Then it’s off to serve as manager of the high school girls basketball team, unless fatigue and nausea interfere. “I’m feeling about 50% right now,” she said.

She has also taken over from her parents much of the writing on her CaringBridge Journal, providing health commentary from a 14-year-old’s perspective—”This tumor is stupid”—and updates on her “long-overdue” bedroom remodel. 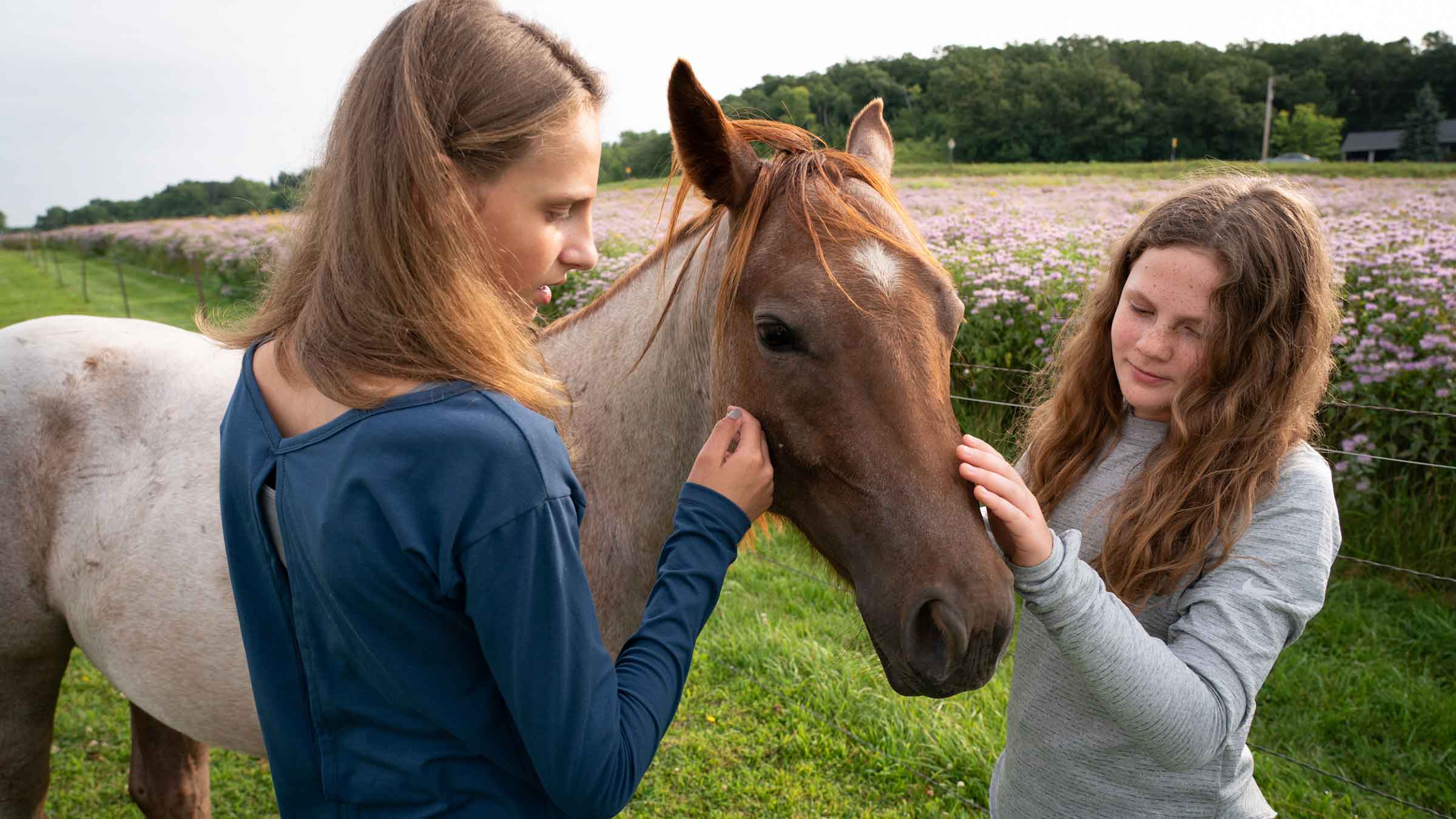 Ana’s tumor has been pressing on the part of her brain that controls movement of her legs and feet, so horseback riding helps strengthen her dorsiflexors, the muscles that help lift her feet. Ana calls the muscles her “horsey flexors,” mostly to tease her mom. Ana usually rides an easygoing horse named Mac, while Elsa has a bit of a wilder ride with Lily.

About her sister, Ana recently wrote, “Elsa is just being her crazy self. She’s liking middle school and she does really well. It’s totally unfair how little she has to study. Even though we have our days, she does show up when I need her. Her life gets changed by all the stuff happening to me, too.”

Elsa prefers the view from horseback, and would like to ride much more often than her schedule permits. She would also like to have much more time with electronics than her mother would consider plenty.

Her view about Ana’s cancer is wise, practical and inspirational: “Just think less and live more, for Pete’s sake! If all you do is worry, if things would actually get bad, you will have lived a whole life of worry. Don’t worry until you have to. Just have fun.”