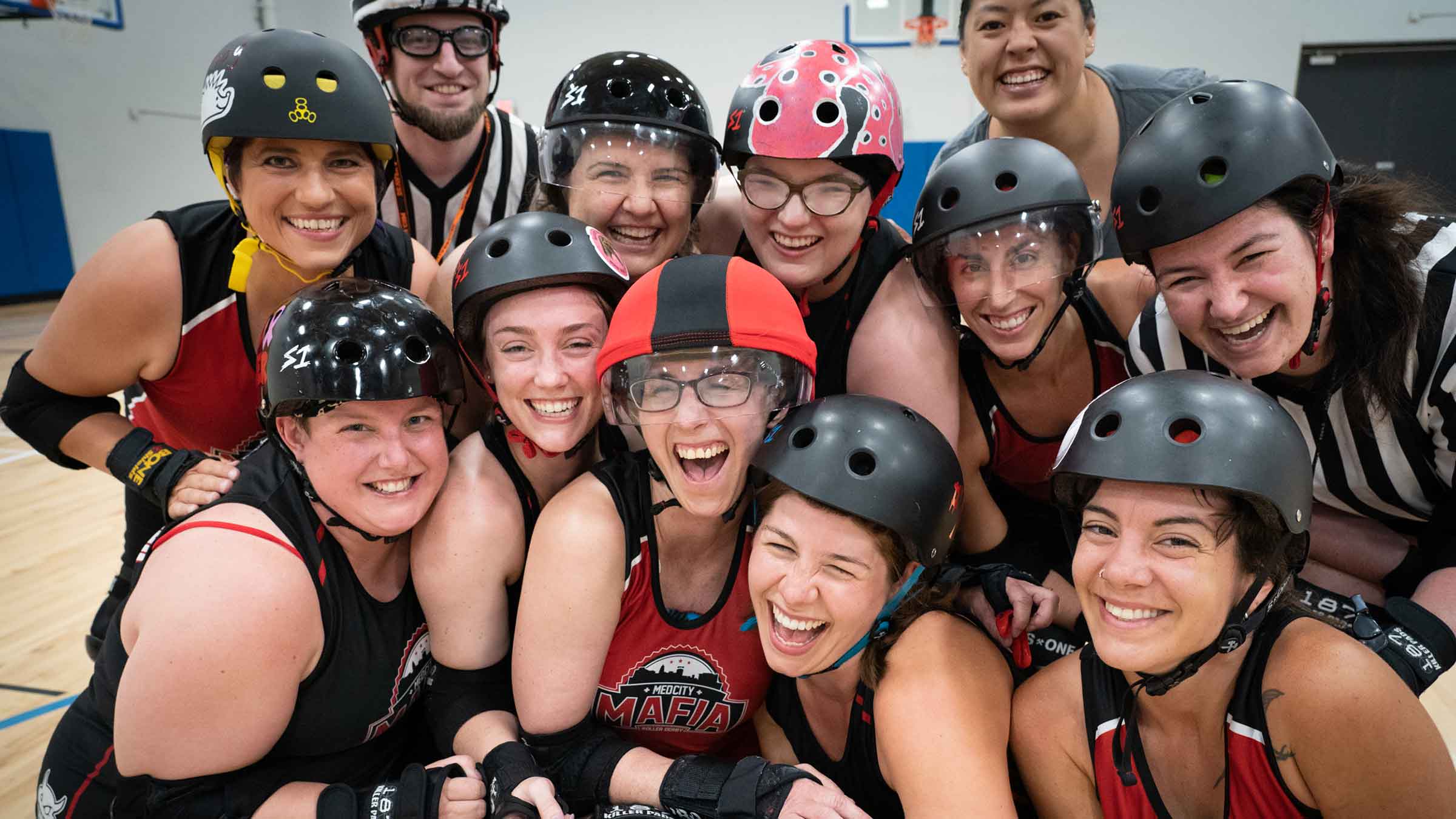 Cat Thisius of Rochester, MN, is a preschool teacher by day and a roller derby blocker by night who goes by the name of “The Mad Catter.” Her profession and pastime fall into the category of “challenging,” but not compared to an out-of-the-blue diagnosis of breast cancer in 2018.

“I was in the best shape of my life and getting ready to go into roller derby season,” Cat said. “I was 47 years old and strong enough to be able to keep up with my younger teammates. To hear ‘cancer’ when you feel so good physically was devastating.”

At her yearly mammogram, a suspicious group of calcifications had been spotted on Cat’s left breast. She was called back for additional imaging, followed by an ultrasound and then a biopsy at Mayo Clinic.

Two days later, she was standing in her classroom when a call came asking if she was available to meet with her doctor that afternoon. The last appointment of the day. “So right then I knew it was cancer,” Cat said.

The diagnosis was ductal carcinoma in situ, considered the earliest form of breast cancer. Preferring not to go through chemo, radiation or hormone therapy, Cat and her husband, Terry, decided the best treatment option for Cat was a double mastectomy. 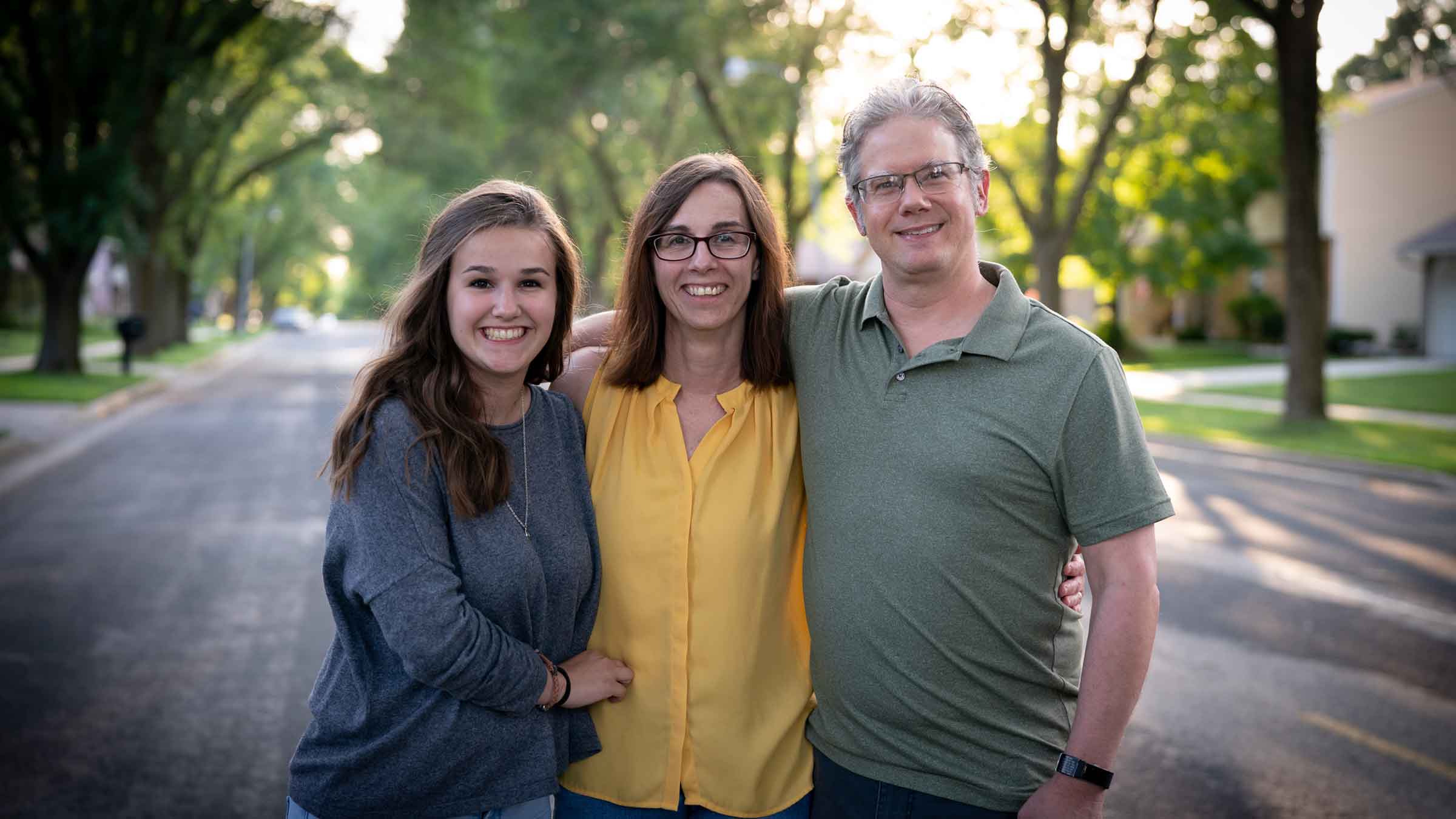 Posing for an informal family picture, Cat and her husband, Terry, joke with their younger daughter, Sara, about Photoshopping in their older daughter, Anna, who is living in Colorado. Cat said the day she was diagnosed with breast cancer, she saw tears in her husband’s eyes and said to herself, “I need to be strong for my family. We are not going to let cancer break us apart.”

“I didn’t want to worry about the other healthy side getting cancer in the future,” Cat said. “I wanted to do everything I could to make sure I would be able to see my children get married, and meet my future grandchildren. I wanted to continue living my life after this diagnosis.”

Opting for a business-as-usual approach at school, Cat decided not to use “the c-word” in her classroom. Her students knew she was having surgery, but she stayed light on specifics. “I only have a 5% chance of my breast cancer coming back,” she said. “They didn’t need to worry.”

It was a different story with her MedCity Mafia teammates. (The team is a nickname for the Rochester, MN, home of the Mayo Clinic.)  “It was very hard to tell my team I had cancer,” Cat said. “No one else had ever had cancer, and they were scared for me.”

She was able to skate up until the time of her mastectomy, and returned to the track six weeks after surgery, with a molded-plastic chest protector covered in Wonder Woman fabric, and a pink breast cancer ribbon on her helmet. 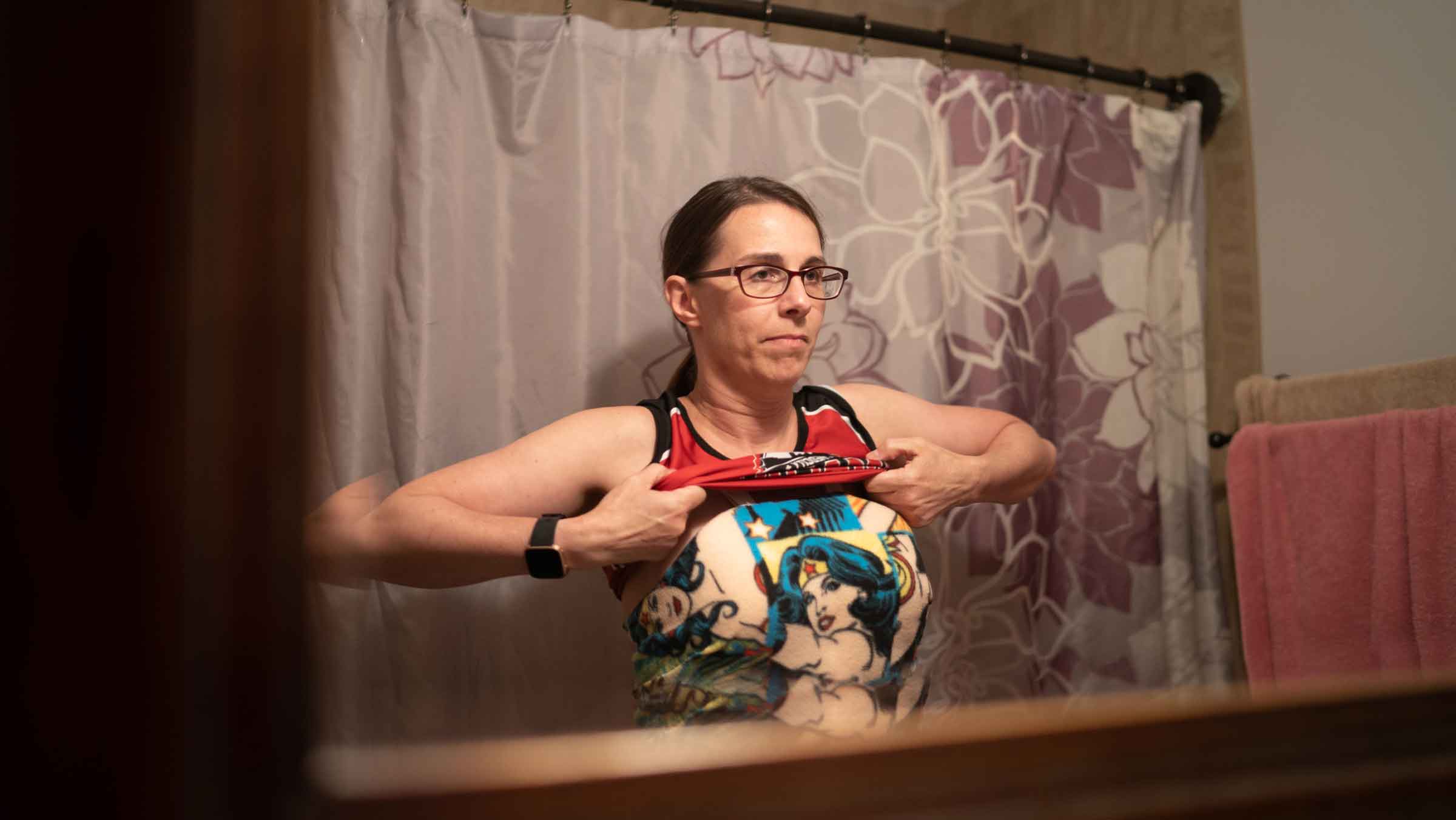 When she returned to the track after a double mastectomy, Cat equipped herself with a molded-plastic chest shield that is often used in fencing. And because a plain shield is too boring for a roller derby blocker, she customized the chest protector with Wonder Woman fabric.

Cat said that down to a person—”Hannahbal Lector,” “Green Eggs and Slam” and “Rogue D. Termination,” to name a few—it was her teammates who helped her find a path toward healing.

“I was able to forget about my cancer when I geared up,” Cat said. “That was a healing thing for me because I could not shut my brain off until my helmet went on and my skates went on. And then for two hours I wasn’t a cancer patient. I was a roller derby player.”

From her roller derby community, Cat said she has felt unconditional support, noting the irony of being hit and knocked down by those who love her. “It is something that has empowered me, and given me so much self-esteem,” she said.

Another healing thing for Cat was having her breast-reconstruction scars covered with art. Through the nonprofit Personal Ink (P.ink) program, which connects mastectomy patients and experienced tattoo artists, lovely, flowering poppies—a symbol of remembrance—are what Cat now sees when she looks in the mirror.

“I had a huge wave of happiness wash over me, like a veil was lifted over my head,” Cat said. “I didn’t see my scars and all the imperfections, rippling and lopsidedness. It was amazing … life-changing.”

Cat said that most days she is back to living life as she did before, just with more gratefulness. “There’s also the realization that a person may look normal on the outside but may still be battling something on the inside,” she said. “On the flip side, cancer has shown me I can do a lot more than I thought I was capable of … like half-marathon capable.”

CAT youre amazing!! we love you!
Cat is a rock star, as is her wonderful family. Thanks for profiling her as a survivor. Cancer sure picked the wrong girl with Cat!
So proud to know you from a school girl on!!!!
Such a wonderful story of an amazing women. Cat has been a part of our lives from almost day one of our time in Rochester. All five of our children have been through Rainbow School, To see her take on a new sport to her as a director/teacher was really empowering. To be close enough to experience her journey through breast cancer was pretty moving. To see her teammates and family always be there for her, hopeful. There are not enough words to express the gratitude we feel as a family for Cat. Love, Beth, Dave, Svea, Devin, Gavin, Claire, and Ryan. You are one Mad Catter
Story of triumph my pink sister
Top