Robert (Grandbob) hasn't added requests yet
Leave a Well Wish to encourage them to add to their planner or ask how you can help.

Hi Friends and Family of the wonderfully unique and curious Grandbob,

It's been a while since the last update, but with some recent changes, we wanted to share how Grandbob is doing. Grandbob was transferred out of the Seattle Cancer Care Alliance care and back to his main oncologist back in March once his bone barrow transplant treatment and follow up was complete.

During this crazy Covid time, he has been seen every other week in-person by his oncologist and has had his lab work done once a week to monitor his post treatment blood levels. While his blood work continued to look "normal-ish", he was having a hard time keeping his weight up and also has had very low energy. Recently, he developed a cough and his general health was not improving like we would've like to see. I'll pause here to say, he's had 5 covid tests and thankfully they have all been negative!

However, in the last three regular doctors visits, he has ended up in urgent care to deal with low oxygen levels and low blood pressure. We all knew something more needed to be done. On Monday, Diana took him to his cardiology appointment (that she thankfully insisted was in-person, as they originally scheduled it as a TELE appt) that resulted in him being admitted to Swedish Hospital for further tests.

The good news is that the doctors and nurses at Swedish are working hard to understand how best to treat Grandbob's symptoms and figure out the underlying causes. We are waiting on a lot of different tests and the docs are trying to find the right balance of medications to help him feel better. I know he has talked to some folks on the phone (thank you for reaching out to him!); you probably noticed he generally does not have a lot of energy to talk. However, please don't let that stop you from sending a text or trying to reach him. His inbox is full, so if he doesn't answer after a few rings, just hang up and he'll try you back when he can.

We'll plan to update this blog more often as we learn more. As of now, Grandbob is just trying to catch a few zzzzz's as it can be really tough getting a few hours of solid sleep when you are being poked and prodded so frequently.

We hope you are doing well and we appreciate the thoughts, prayers and support that have been offered and given over the past months. Sending air hugs.  <3 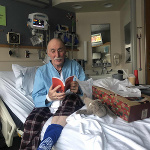 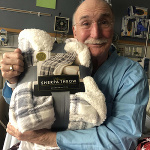 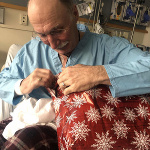 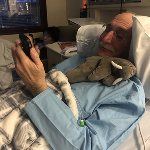 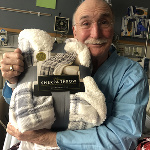 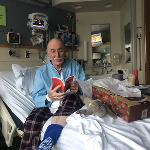