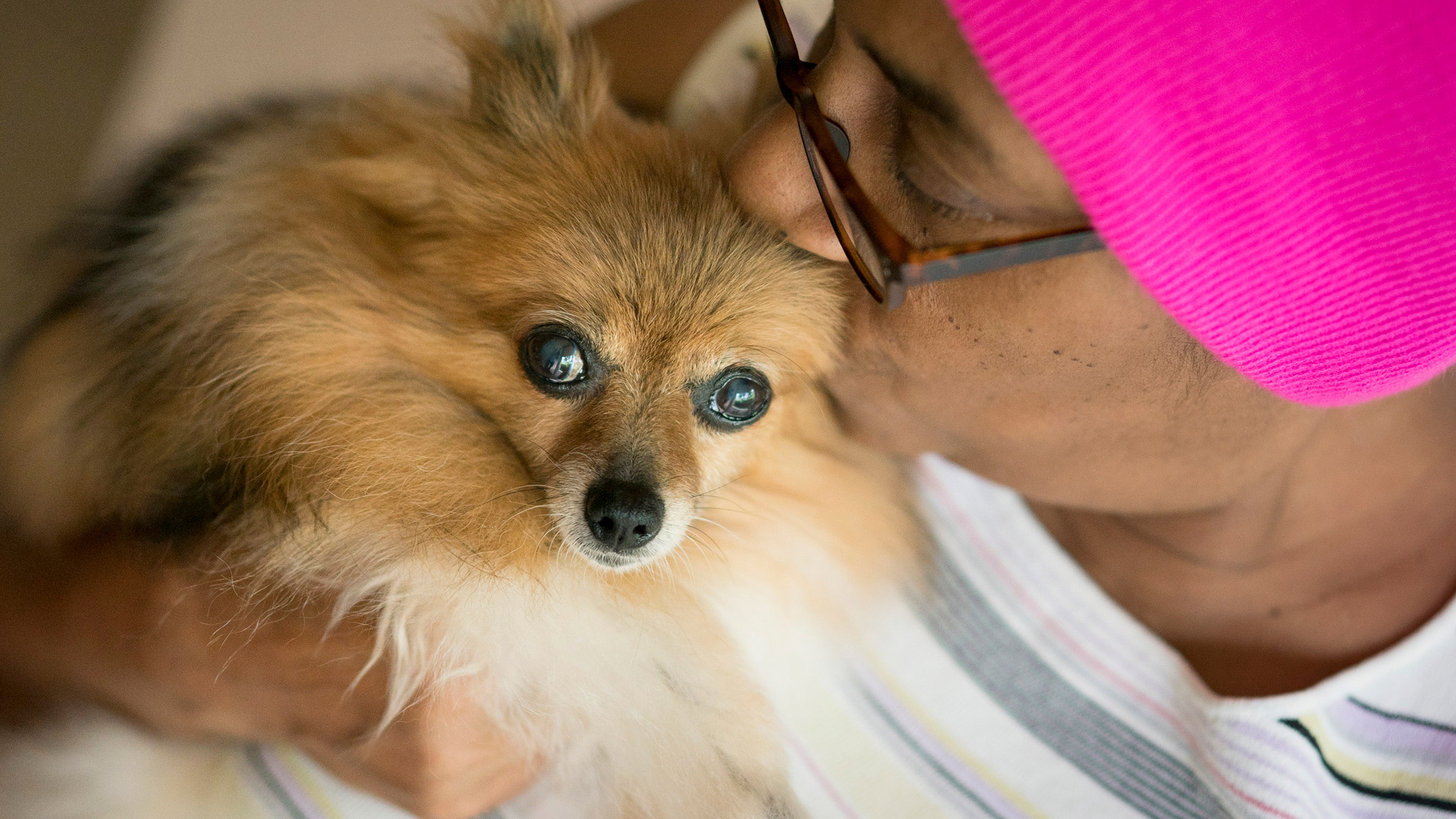 A fluffy rescue-turned-service dog named Halo has helped Cyteria Knight of Charlotte, NC, heal after suffering a ruptured brain aneurysm and stroke in her daughter Raquanza’s kitchen in January 2017.

Excellent doctors and nurses got the lifelong social worker back on her feet, so the Pom-Chi (Pomeranian-Chihuahua mix) named for Beyonce’s song “Halo” could take over. And so could Cyteria’s partner of 35 years, Susan Miller, also a social worker, who has supported Cyteria through finally quitting smoking, eating better and adding exercise to her daily routine.

“People always say, ‘Oh, I appreciate life so much more after what I’ve been through.’ But it’s God’s truth: I feel thankful for every day above ground at this point.”

While Cyteria was still in intensive care, Susan was able to arrange for Halo to spend some time at the hospital. “The people at the hospital could tell that Halo’s presence was helpful to my recovery,” Cyteria said. “The nurses would sometimes take her to other patients’ rooms, to kind of help them through.”

Cyteria’s physical recovery continues, but being cleared to return to work is not on the near horizon. And as Cyteria’s primary caregiver, with health issues of her own, Susan is also at home.

The couple, who have spent their careers navigating systems and programs on behalf of others, now find themselves on the receiving end of help.

It is a difficult shift.

“Under normal circumstances, those things would make you kind of depressed,” Cyteria said. “But my God helps me to keep calm and sort of accepting of where I’m at, and feeling good that it’s fine for now.”

Halo helps, too. “To be able to hold her in my arms and having her breathe next to my heart, those kinds of things feel great,” Cyteria said. 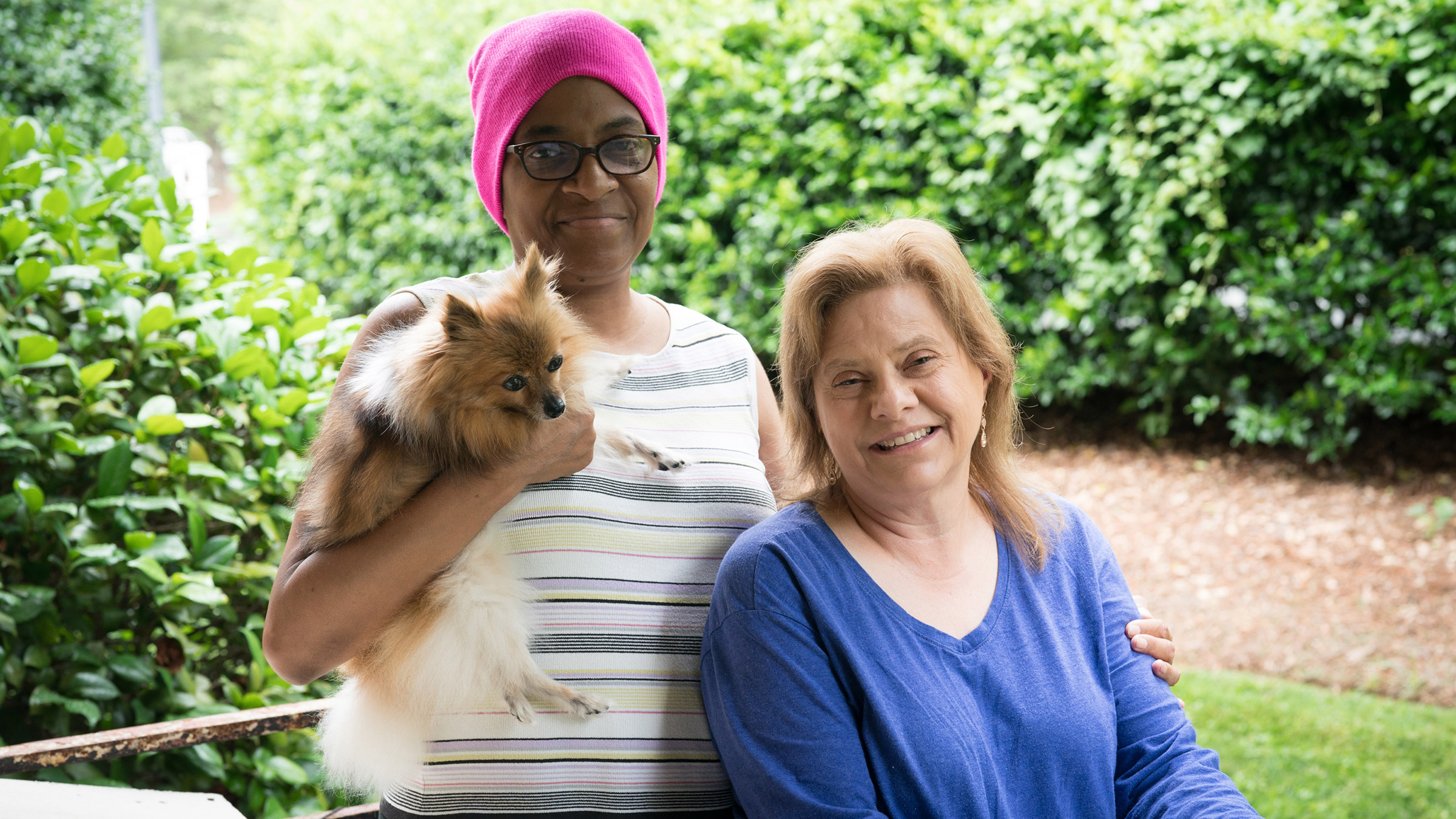 Cyteria and Susan have been together for 35 years and are the parents of a daughter, Raquanza.

Cheerfully admitting the dog is spoiled “in a good way,” Cyteria usually carries Halo when they are out for exercise walks. They often attract attention.

“From a distance, she looks like a puppy, but she’s a much older dog,” Cyteria said. “Something in her makes other people feel calm.”

“That dog has been our godsend,” Susan said.

Unfortunately, shortly after we visited Cyteria and Susan, and fell in love with Halo, Susan let us know that Halo died in her sleep. She was 11, and her health had been declining. Cyteria and Susan miss her terribly.

Start a Personal Fundraiser to Help with Expenses

Someone you know needs CaringBridge.
Tell them about it.

I think that history is so cute, i really like it because i really love dogs and their are a big happiness for everyone.
Sorry about Halo, it hurts like heck when we loose a dog that is more human than dog.... Thank you for your service, that would have been an extremely hard job to do.

I had to take care of the chickens. I had to physically go outside to be with them. They helped me forget what I was going through. It put me into the present in a different way.

His body is strong, but not coordinated. His mind is strong, and it is pulling things together. His spirit is strong, and he’s keeping a good attitude. You watch that and you say, ‘Yep, he’s healing.’