Tom hasn't added requests yet
Leave a Well Wish to encourage them to add to their planner or ask how you can help.

Many of you supporting me will not recognize the name John Ward.  John Ward was the voice of the Tennessee Vols for twenty-five or thirty years.  He was an sports announcer legend known across the country for his creative way to verbally paint a picture with his radio voice.

Tom’s at the five.  He’s at the four.  He’s at the three.  Yes. What has he done? On Tuesday Tom passed the ONE MILE WALKING MILESTONE 7 days after surgery.  Yeah for ole Rocky!

Now I’m at the goal line.  The next play called is - cancer free up the middle! AND. HE. SCORES!!!

So on Thursday we return to the hospital clinic at 9 a.m.  Out come the two stents going to each kidney.  The  32 stainless steel staples ‘really?’ come out.  Hope there are no ouchies!

Thanks for your prayers.  Keep sending them.

Next steps in a few weeks are teaching the neobladder to pee when I SAY PEE.  And not before. 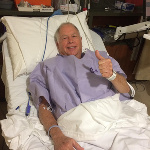