Kate hasn't added requests yet
Leave a Well Wish to encourage them to add to their planner or ask how you can help.

We are into the fourteenth month since Kate's bleed September 28th, 2018. She's had victories: the stent in her superior mesenteric artery. The feeding tube. Her weight now stable above 100. All wonderful.

The continuing problem has been her lungs. She's on oxygen 24/7, can't walk far, has little energy. There was, too, a new bleb in her May c.t. scan that was that most ominous of words: suspicious. Our first encounter with pulmonology was at Colorado Pulmonary Intensivists. It didn't go well for a variety of reasons, so Kate asked for a second opinion from a National Jewish doctor.

Dr. Taryle. Saw him in September. He wanted another couple of data points before proceeding. Another pulmonary function test and another c.t. Those were done in the past couple of weeks. Saw Taryle today.

The pulmonary function test showed mild impairment. Only mild. Good news. The c.t. scan was unchanged from May. That's six months. The bleb is probably part of the scarring process. Her lung disease is stable. He sees no need to do a lung biopsy at this time. Kate was happy. She's a high risk candidate for the surgery.

He also sees no need to prescribe any medication for her since the few drugs, mostly new, for fibrotic lung disease all have nasty side effects. The benefit/harm ratio is not sufficient to make treatment a good idea.

We left, scheduling another appointment for March. The lung biopsy is off. Kate feels relieved about the status of her lungs. Me, too. Now we just have to get used to this unusual situation.

Not only did she have successful cataract surgery on both eyes in October, her lung disease now seems mild and stable!

Unless things change, this will be the last update until next March. 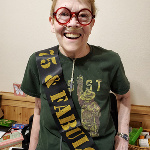 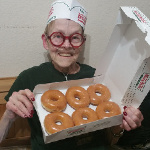 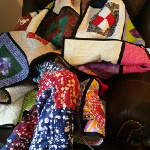 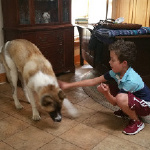 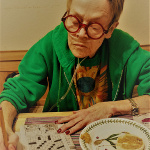 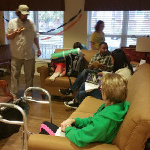