Josh hasn't added requests yet
Leave a Well Wish to encourage them to add to their planner or ask how you can help.

It has been a little while since i have posted an update on Josh's progress, which has been amazing.  He is doing very well, and rather than give you an update about him, I am going to allow Josh to update you himself.  This may be our final installment for awhile, but from Josh:

I want to pen something to thank everyone who has reached out to my parents and me in regard to my brain injury that occurred last month. It was overwhelming to know how many people were worried about me. I want everyone to know how thankful I am for every comment and message, letting me know that prayers were coming my way. While I read over my dad’s Caring Bridge posts, I was blown away by the eloquent words he used to paint a vivid picture of the reality of my injury. In that moment, I just wanted to tell everyone “hey it’s all good,” because scaring anyone is the last thing I ever want to do. This injury allowed me to have alone time to reflect on the fragility of life. It was confirmation that I am lucky to have so many people who care about me. I hope that my actions and words will let everyone know how grateful I am for every person who has reached out to my family and me. We serve an awesome Almighty God who answered the prayers everyone sent up.

As many know, I’m not the most patient person. I wanted to beat any problems that the TBI brought on as quickly as possible. I worked as hard as I could to “get back to normal.” I looked forward to appointments with my doctors, and anticipated being cleared and returning to my normal way of life. I was completely blown away by the first visit. Being exactly one month after the fall, I was hoping to get cleared upon arrival, and am so relieved to tell everyone that has happened.

Prior to the visit, I thought being cleared was the most important information I would hear that day. However, my Neurologist left me with even more profound words. I want to share a tidbit of what he said to me with all of you. After handing me a letter of clearance, Dr. Capel began to dive into something that will stick with me forever. He began by telling me there are four pillars of faith to take away from this experience. The first: You have been given a huge gift and you can recognize that God has a plan for your life; Two: You have suffered and can now empathize with others who suffer, especially Jesus who suffered on the cross for your sins; Three: Recognize the people who God has put in your life to care for you in times of need; and Four: You are called to share your story and your gifts with others. After going through all these pillars, I was completely moved. It helped open my eyes to being as intentional as possible with all of my actions. Another piece that motivated me while I was with Dr. Capel was a reference he made to a verse from the book of Isaiah 64:8, stating that “we are broken cisterns, we all have leaks and cracks, but God is our master potter.” It really stuck with me. I found a little humor in it due to my cracked head, and a lot of truth due to the fact that we are all part of the Master Potter’s plan. 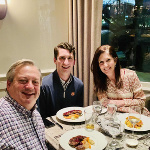 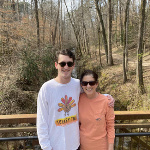 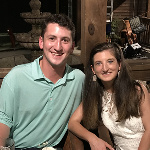