Jonathan hasn't added requests yet
Leave a Well Wish to encourage them to add to their planner or ask how you can help.

Sometimes, it’s the Little Things.Let’s talk about all of the “little” things because in order for the big picture to become clear, all the little things have to come together in just the right way. And, for clarity’s sake, I’m speaking comparatively here. The measures taken in each of these instances were absolutely life-saving and, in the real world, are a pretty big deal but when you take into consideration all Jon’s body has been through, “little” seems appropriate. I briefly reviewed on update one that Jon’s Impella was removed successfully. For review, an Impella is a medical device used for temporary ventricular support. The Impella saved Jon from his severe heart failure as previously discussed but once it was removed he was faced with a few more obstacles. Without the Impella Jon’s heart had very little pulsatility, despite very high doses of epinephrine and milrinone (medicines that help kick the heart in gear) increasing the chances of a clot. If a clot occurred, we were told there was really not much they could do at that point, worst case scenario. But, as if Jon knew he was underperforming (don’t ever play Scattergories with him, or Megan for that matter, underperforming is just not in their vocabulary), shortly after receiving this news, his heart started to show the first signs of recovery. That recovery trend continued for two more days which gave Jon’s team the confidence to dial back his Ecmo machine from 4.6 to 3.97 on Monday. Remember the Ecmo is a life support system for his heart that oxygenates his blood allowing his heart to go on what we hope is a short vacation. We continue to see more signs of recovery from his heart, laying the foundation for his other major organs to begin their road to recovery, too.  Let’s move to Jon’s lungs because at the very least, they deserve to win Best Supporting Role. Initial chest x-rays of Jon’s lungs looked like one big gray cloud with no discernible features. The fluid retention had overtaken his lung cavities but removing that fluid would be no easy feat. Since Jon was on blood thinners to allow his blood to move more easily through the Ecmo, getting to the lungs, behind the chest cavity, posed a serious risk. Keep in mind his low heart pulsatility, meaning less blood production. Jon needs every possible drop of blood in his body. Despite the risk, on Sunday his team moved forward with a fluid pull from his lungs removing two full liters of fluid. I’ll say that again...Two. Full. Liters! Picture two, one liter soda bottles. Think about how much you cough when getting just a small amount of fluid down the wrong pipe. Jon’s lungs deserve their own award ceremony in my opinion.On to that nasty word from last night...amputation. I guarantee, we’ll never be able to add up the hours of lost sleep we’ve all suffered trying to wrap our heads around this concept. What we haven’t relayed is the lengths at which Jon’s medical team went to try and save his lower limbs. Dopler scans, massages, antibiotic regimen changes, and the last-ditch invasive effort of a Fasciotomy. Jon received a Fasciotomy on both the interior and exterior of both calves. A Fasciotomy is a potential limb-saving surgical procedure where the skin is cut to relieve pressure and treat resulting loss of circulation to tissue or muscle. Unfortunately despite all the above mentioned efforts to save Jon’s lower leg limbs, none were successful and amputation was literally the only option.Sometimes, in life things just don’t work out the way you’d hoped. Sometimes the resulting disappointments of your former hopes can bring you to the darkest of places. Sometimes you just need to scream “What the f**ck!!!!” into your blanket in an LA hospital waiting room as loud as your healthy lungs will allow. And sometimes you need to let your friends, family, village pick you up off the hospital lobby floor and face this Brave New World together. Sometimes life just doesn’t make any sense...Oh, and don’t think we forgot that behind each of those “little things” was a team of medical professionals rallying around Jon and Megan. Per Megan’s request, her “girl squad” came together today to make a care basket for Jon’s medical team, complete with protein shakes, granola bars, beef jerky, restaurant gift cards, and homemade “life-saving” cookies. Because sometimes a “little” thank you just doesn’t quite cut it. #EffSTSS #WatsonNation 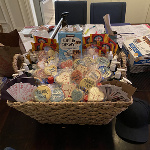 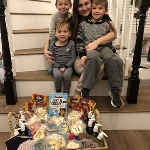 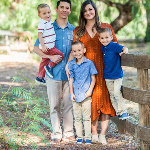 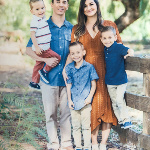