Jeff hasn't added requests yet
Leave a Well Wish to encourage them to add to their planner or ask how you can help.

Today was the day we found out Jeff had a brain tumor.  Woke up on Father’s Day we decide to stay home and cook breakfast so jeff took off to fred meyers.   Shortly after he did I started calling him.   He didn’t answer right away.  Then I keep calling til he answered and it sounded like a butt dail.  I hung up and called him back.  He was making grunting noises at which I knew something was wrong.   Not knowing exactly where he was I started freaking out.   I went to the front window of our house and saw him out by the garage door trying to get in.   I ran out to see his fave droopy and his speach impaired.  Got him in the house and called 911.  He was getting more agitated as I’m asking 911 to come out.   It seems like forever but they got here and started checking him out.  We finally convinced him to go I. The ambulance.   There was no way I could keep it together to drive him.  I meet him at the hospital and they took many test and found out he had a tumor on his brain.  Now was to determine what to do next and to see if it was cancerous.   Very stressful day.   But glad we took the ambulance because if we would of just went on our own we probably would of been sent home and told to make a doctors appt. 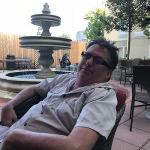 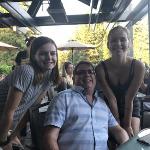