Deann hasn't added requests yet
Leave a Well Wish to encourage them to add to their planner or ask how you can help.

Deann died yesterday shortly before 4:00 a.m. It was clear the night before, when Alice and I moved her to the bed in our room, that the end was near. The light that usually shone in her beautiful brown eyes was not there. All that remained was for her heart to stop beating.

When I went to bed, I put on some of her favorite hymns so she could hear them one more time. Alan Jackson has a beautiful album full of them, called Precious Memories. Deann loved singing hymns around the house, and to herself while she gardened. She found great comfort in the words, and I like to think she could hear them as I laid there with her. I kissed her goodnight and told her thanks for spending another day with us, which had become my habit in the last couple of months. Eventually, I fell asleep.

I awoke around 3:00, and her breathing had not changed from when we put Deann in bed. It was labored, but regular. I just laid there with her, holding her hands and stroking her hair. She called out near the end a couple of times, and I let her know I was there, and I told her I loved her.

True to her quiet nature, Deann's last breath came with no fanfare. In fact, it caught me by surprise. She simply drew her last breath, and then stopped. I put my ear to her chest and could hear nothing and I knew she was gone.

Her last few months were not easy. The brain tumor the doctors had been able to beat back returned in July of this year, claiming her ability to walk. She was able to manage a little bit with a walker, but it was always a struggle, and it frustrated her to no end. She was happy to put it aside finally, in favor of a wheelchair. She was able to still climb stairs, so after a month in a hospital bed following her return from the hospital, she was able to climb the stairs to our bedroom. Eventually, at the end of October, even that became too much, so I bought a bed and booted Alice from the bedroom on the first floor that had become her home office. It was in that bed that she would die.

Every day, Alice and I would move her from the bedroom to the living room, or the sun porch if it was warm enough. She slept a lot, but would always want to be awake for Jeopardy at 3:30. Fridays after dinner we'd watch the new episode of The Great British Bake Off. It's a gentle show which matched her gentle nature. She was a huge fan. What brought her her greatest pleasure, though, I think, was being read to. Alice or I would read from a book to her, and she never objected. It's something we did when we first got married, and I was happy to revive the practice in her final days.

Her last good day came a couple of weeks ago on a Saturday. Her family gathered on our deck to celebrate her sister's birthday. It was a nice warm day, and Deann was able to be out with all of us, and stayed awake all through the party, which was a nice treat. By then, she'd mostly given up talking but was able to sing Happy Birthday. To our daughter's consternation, she spoke to her for what would turn out to be the last time. Alice asked her what was up, and Deann replied with that old childhood retort, "chicken butt". Always a wit, that lady!

Luckily for me, her last words to me were "I love you, too", which she was able to get out one day soon after that when I told her I loved her, which I did every day of our marriage, no matter how much we fought that day. It was true every time I said it.

The last 2 weeks of her life were pretty sleepy. Eventually, she gave up eating, and, finally, drinking. She, miraculously, was never in any pain. She got a little bit of hospice care, but most of the taking care of her at the end was done by our daughter and I. It was a labor of love, and I'll remember these last days of her life for as long as I live.

Deann was first diagnosed with breast cancer when she was just 36, and with glioblastoma when she was 52. She lived to be 54 and she never let the disease define her. It was just a part of her life that she learned to live with. Aside from the months of treatment, her life was pretty good. She raised 2 great children, grew a beautiful garden, struggled mightily to keep a clean house despite her husband's and kids best efforts, kept us fed, and was a well respected professional at work. She got to travel with her family and friends, but always was happiest at home. She let us know she wanted to die in it, and it was a wish I'm happy I was able to grant.

It's been great hearing from everyone who knew her, and learning just how many lives she touched. She was a quiet woman, but strong, and she made me a better person.  I'm a lucky man to have been married to her for 29 years. 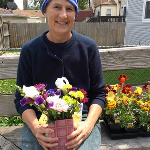