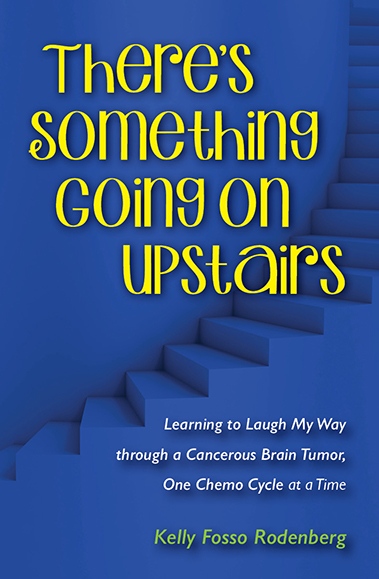 When her husband was diagnosed with a rare blood disorder, Kelly Fosso Rodenberg became a caregiver. She used CaringBridge to keep family and friends updated, and said she was surprised to discover how good it felt to write. Six years after her husband’s successful treatment, Kelly became a patient using CaringBridge.

She had been feeling “a little off,” and went to the doctor after having some trouble typing. During that office visit, the doctor gently said, “I think there’s something going on upstairs.” This ultimately became the title of Kelly’s memoir reflecting on her life after the diagnosis of glioblastoma, an aggressive brain cancer.

Despite the dire statistics associated with brain cancer, Kelly, has once again found writing to be therapeutic. She said her approach to life is influenced by growing up on farms in west central Minnesota. Life with a fast-growing terminal brain tumor can be tough, she said, “but this firm girl is even tougher.”

Kelly hopes  that sharing her experiences and perspectives as a caregiver and a patient might help and encourage others walking a similar path.

Buy There’s Something Going on Upstairs on Amazon