Temporarily turning over “care and feeding” of her only child to his grandparents helped heal Nicole Wills of Cramerton, NC, after complications from pulmonary fibrosis catapulted her toward a double lung transplant in 2016.

“It went from ‘I had a bit of a lung issue’ to an emergency,” Nicole said. “Friends had seen me out walking, and they couldn’t believe what was going on.”

Nicole and her husband, Nelson, couldn’t believe it either.

On the last day of fourth grade for their son, Rich, Nicole was transported by ICU helicopter to Duke University Medical, three hours from home, with just the clothes on her back.

“There was literally no planning or preparation,” Nicole said. “One day we’re home, knowing that my health was declining, and the next day I am in a terminal situation, fast-tracking for a life-saving double lung transplant. Then we come home, three months later, after a lot of stuff.”

The self-described “Type A” couple was knocked for a loop, with 10-year old Rich at the center of it.

“It was very difficult to just all of the sudden not see my son, not be able to plan for him or prepare him for what was going to happen,” Nicole said. “But I needed to be at Duke, and Nelson needed to be with me. So I just had to surrender being a mom to focus on my healing.”

The “surrender” of Rich was to Nelson’s parents, Richard and Helen, who came running, of course, as any grandparent would.

For a month, Nicole was too ill to communicate with Rich. But Nelson talked to him every day, often via Facetime: “We had a motto: ‘You be good, have fun, and brush your teeth, and I’ll take care of Mommy.'”

Rich, whom his parents describe as an “old soul,” logged lots of hours swimming with his cousins, hitting golf balls and eating his fair share of ice cream with his grandpa, “G-Daddy.”

When Nicole’s health became more stable, Rich made the trek to Duke, to see his Mom. “I couldn’t even really hug him, because I was in so much pain physically,” Nicole said. “So in my mind, I just kept realizing that I can’t be his mom right now. I have to focus on me. I have to focus on the healing, so I can get back.”

But at the end of summer, just before the start of the new school year, Nicole was released from the hospital to go home. Nelson captured what healing looks like for the Wills family in a CaringBridge Journal post from August 2016:

“As I type, Nicole and Rich are sleeping in our bed. Last night was the first time in a long time that we stayed at home together. From June 6, to Aug. 28, to be exact.

“Now, as we all know, there is no gain without some pain. This return to normalcy from where we have come from, and what we have gone through, isn’t quite a piece of cake.

“We all pray for forbearance, and try to humbly counsel each other as we march toward our permanent return home.”

Nicole: Take the Time You Need to Heal 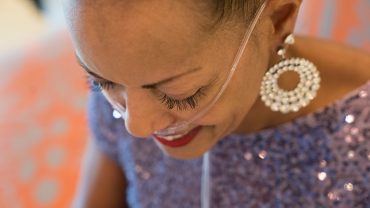 Look Good, Even When You Don’t Feel Good