When Tanya Bailey of St. Paul, MN, was diagnosed with throat cancer in 2016, her husband, Peter, saw it was his role to support her through what they both knew would be a grueling course of treatment. It was. And he did.

With Tanya now on the other side of radiation and chemo—she is back to work and chipping away at her PhD—Peter has had time to reflect on what it was like to be a husband one day, and a caregiver the next.

“I had watched friends in situations similar to ours, and I thought I had an inkling that caregiving would be taxing,” Peter said. “But I also saw it as a powerful and important role. I wanted to do it well.”

So Peter approached caregiving, as much as he could, in the same way he works: strategically and thoughtfully. “I have a powerful passion for practicing possibility-thinking,” he said, of his career in organizational development.

Peter is the first to admit that the realities of supporting a very ill wife didn’t leave much time for possibility-thinking. Trying to keep Tanya’s weight—and spirits—up while staying engaged at work and running their household were, indeed, taxing.

But in some of those lie-awake moments that every caregiver knows, when it’s not clear what tomorrow will bring, Peter tried to take a longer view. He said looking for lessons that might help others was a way of putting his worry to work.

He came to look at caregiving as a continuum. Peter said, “You start as a caregiver. And if you don’t do it very well, you become a caretaker. And if it gets worse, you become a resentful caretaker. I was really aware that I did not want to do that.”

With Tanya’s full support, Peter did what caregivers across the planet are told to do, but no one ever does. He took care of himself, too.

“It might seem selfish to be a caregiver taking care of yourself first,” Peter said. “But it was like what the flight attendants say: ‘Put your own oxygen mask on first.’ Then I was available to be a really supportive caregiver.”

Peter did some bigger things to take care of himself, as part of laying out a caregiving support network. No. 1: He asked for more flexibility at work. No. 2: He and Tanya set up a CaringBridge website to tell their story. No. 3: He put out a call out to his circle of men.

The response to his call was amazing. “About 20 men showed up,” Peter said. “It was around a fire, and we had a meal. Some people played guitar … some shared their own cancer journeys and what helped them get through. It was just what I needed.”

Some smaller things helped Peter, too. Like Old Spice cologne.

“I would use my Dad’s cologne, and there was something really grounding and nurturing about being in the smell of my father,” Peter said. “It made me think of him … it was a family hug kind of thing.”

While no family goes through a cancer journey unchanged, Peter counts the gifts he received from taking care of Tanya among his most precious. “I am not a resentful, exhausted caregiver,” he said. “My wife and I are closer than ever. We have come through the fire. We did it together.” 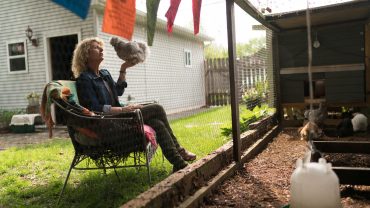 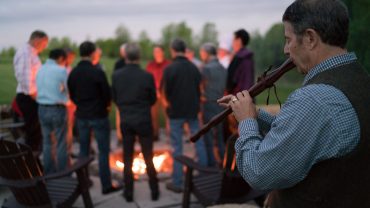 Caregivers Talk About Struggles and Gifts of the Heart