In addition to being moms of sons starting a new school year, Erica Bratland, Claire Schwab, Amy Beasley and Nicole Pierson, none of whom have met, have something else in common.

Their hearts are full of gratitude … simply because they have their sons.

Trip Bratland and Teddy Schwab were seriously injured in separate car crashes; Andre Beasley has been treated for kidney cancer —twice, and Gavin Pierson has been fighting a rare brain tumor for more than half of his young life.

That these boys are healthy enough to be back riding the bus again, carrying trays through the cafeteria and even complaining about homework means the world to these moms.

Trip has no memory of being in a car that was broadsided at 57 mph, in a suburban intersection in Minnesota, on the way to preschool. Or the weeks he spent in the hospital, and months of therapy to recover from bone injuries, internal injuries and a brain injury.

Now 9, and fully healed, physically, Trip jokes that when he turns 18 he will get zipper tattoos at the top and bottom of the scar that runs the length of his chest.

His Mom, Erica, will never forget the accident. She said, “We keep it so close to our hearts that we almost did not have Trip. We think about it first thing when we open our eyes in the morning, and last thing when we close them at night.”

Claire Schwab, of Virginia, expresses a similar sentiment. Of the horrific car crash in March 2016 that left her son, Teddy, in a coma for a month, she said, “I don’t think you can go through an experience where you almost lose a child, or your life is completely uprooted for almost a year, and not feel different.”

When Teddy returned to school to finish fifth grade with his class, Claire wrote on his CaringBridge website, “We owe so much to the team of teachers, specialists, and administrators at our school, who all worked tirelessly, and tenderly, to see Teddy through his school year.”

As Teddy begins sixth grade, his parents remain grateful for everything associated with back-to-school, and that their son’s cognitive “re-wiring” continues after a traumatic brain injury.

This School Year Will Be Different

Amy Beasley of Wisconsin looks forward to an uneventful school year for her 14-year-old son, Andre.

The boy who can’t get enough of baseball spent last winter and early spring in and out of the hospital, as part of treatment for recurrent kidney cancer.

“Everyone was so supportive, but it was a hard school year,” Amy said. “This year will be different, with Andre’s chemo and radiation behind us.”

Andre’s treatment ended in time for him to play summer ball, with his Mom as assistant coach. With the season ended, some of those who have been Andre’s teammates since age 10 remain his schoolmates.

“They were Andre’s community of support as he fought his cancer,” Amy said. “They see that he’s still just a normal kid, with a port in his chest, has gone through a lot of medications.”

Nicole Pierson said her son, Gavin, also prefers to be viewed as “just a normal kid.”

His physical healing, from multiple brain surgeries, chemotherapy, steroid and clinical-trial drug treatments, and a series of laser ablations, will continue for some time.

But Gavin is too busy with life, and school, and karate, to think much about it.
As a mom, though, Nicole can’t not think about it.

“Going through something like this, you never really are the same person,” she said. “I find myself every day just being more appreciative for the little things.”

Nicole said that when Gavin was sick, he couldn’t run outside, play with his brother, or do sports. “I’m just so thankful for the things he can do now,” she said. “When I see him jumping outside or playing catch with his brother or doing a karate kick, it just brings joy to my heart.”

NOTE: The Bratland, Schwab, Beasley and Pierson families will be featured in How We Heal, a CaringBridge special project launching in late September, made possible with your support. Please read and view more at caringBridge.org/resources. 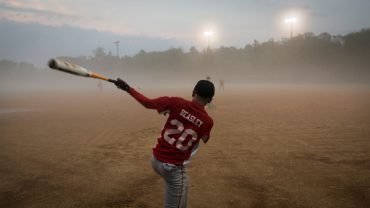 He’s Not a Kid With Cancer, He’s a Second Baseman

Amy: Connection is a Huge Part of Healing 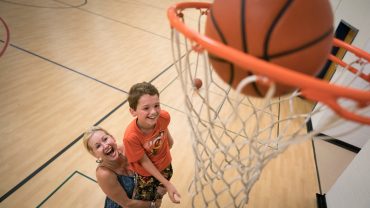